If you are on a budget you might be amazed at what you can create for just a few dollars!  I went out in my green belt this week and cut a black plastic garbage bag full of greenery from 4 different types of conifers.  Because I already had the base and cones and fabric, this really cost me nothing.  The red plaid fabric for a bow were from an old throw which had moth holes in it. (I already used them last year and I save the large California pine cones each year too) 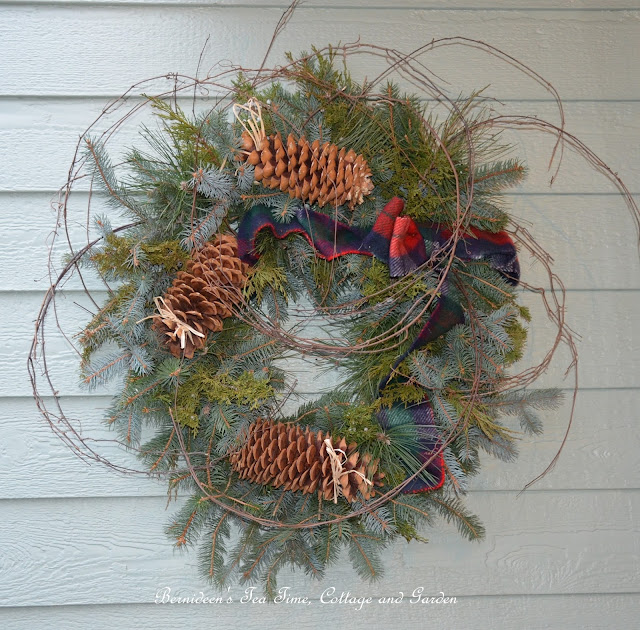 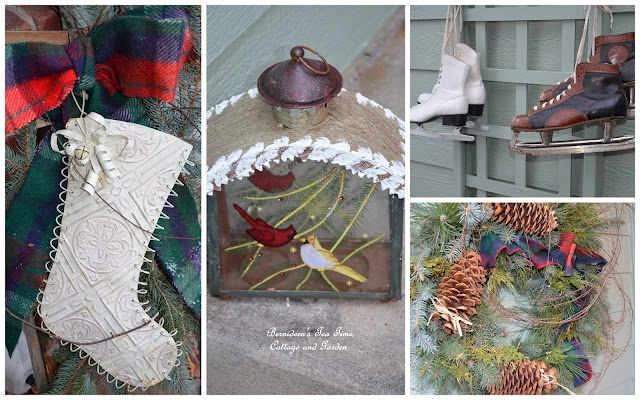 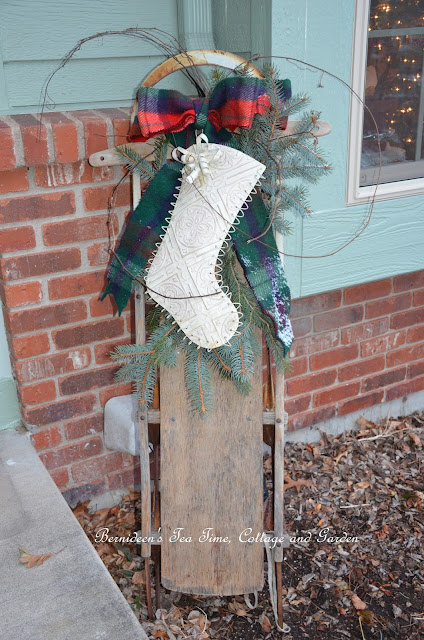 I cut my greenery for the wreath about 8" - 10" long and wired 4 different pieces together first with fine wire. Put the longest in the back of course.  It does take a lot - I think I had around 24 bunches. Later I attached these with thick bailing wire and tightened them to the center of the wire form.  The wire forms come in different sizes and I used a 20" form which I save from year to year. By the way, my wreath wasn't perfectly shaped.  You know, some sides were fuller and some too skinny so after I hung it up, I stuck in extra bunches to "shape it up".  I also stuck in the grape vine pieces at the end.  The vintage wooden sleigh just has some 12" long pieces of greenery that are wired together in the middle. 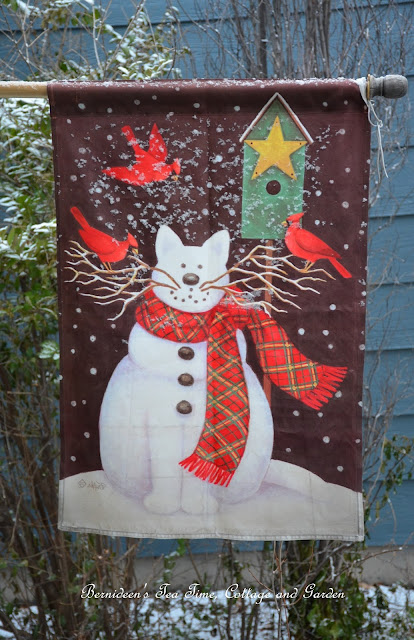 While I was out getting the greenery, it began to snow lightly! 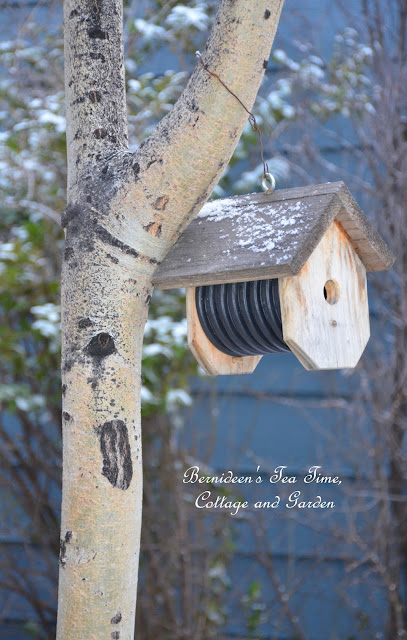 I see ice skates in almost every antique mall I go in.  Most of them are inexpensive too! 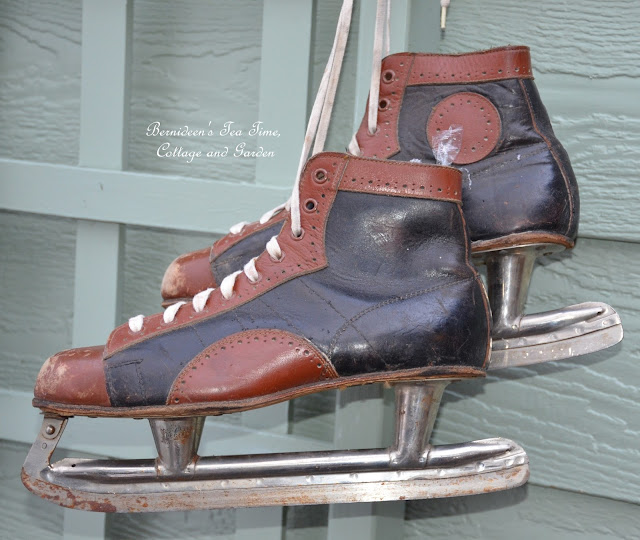 Really, there is something lovely about using fresh
things and people can smell it as they enter your house.  Have a great weekend! 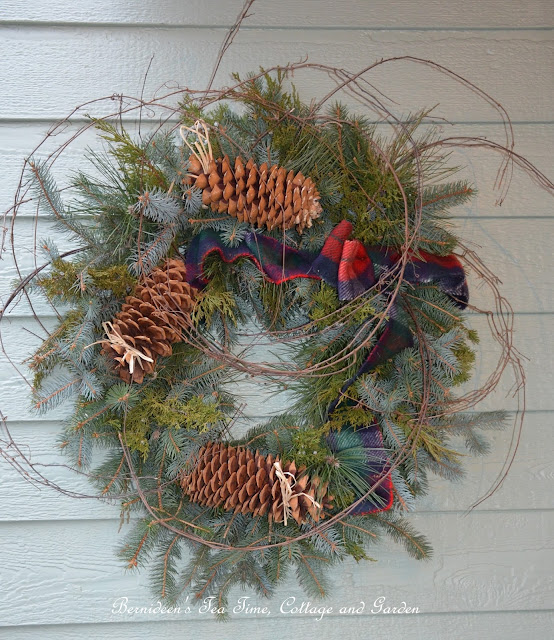 Posted by Bernideen at 5:39 PM

I love how you've used the fresh greens! Not everyone could put something together that would as pretty as yours. You do have the knack of making pretty. Thank you so much for popping in to see me and I hope you're doing well.
Be a sweetie,
Shelia ;)

I always use fresh -- a fresh wreath on the door and fresh greens on the mantles! I get mine free from the "trim bin" at Home Depot and if that is not enough, I cut some cedar from a friends. Free is fine!

It all looks SO awesome, Bernideen!

You did a remarkable job with that wreath - WOW!

I love your wreath too! Boy, do we have greenery and tons of Pine cones. You inspire me, XOXO

Hello Bernideen,
Your wreath is lovely! As well is your sled all decked out and the skates too, make a really festive touch. I really agree with your thought of using fresh foliage, it smells so good!
Hugs,
Terri
I am attempting my own first fresh wreath tomorrow... : )

Hi Bernideen, your wreath looks great, so festive looking! I have never used fresh greens, only faux. I like it on the sled and I like the old skates, cute!
Have a great week ahead!
Gina

I have allergies so the less I handle fresh greenery the better (unfortunately). I get a large fresh wreath for the front door every year. Love your men's skates, I have a vintage, white pair of women's ice skates, I hang them with my wreath. Wonderful use for the old plaid throw. Best ~ Mickie

Oh, those charming ice skates are something we don't often see here in Georgia. How very Victoria! 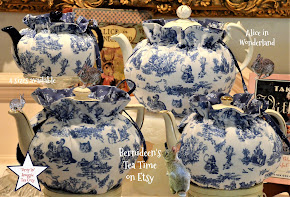 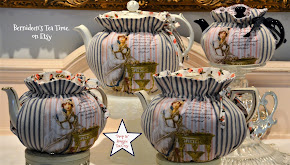 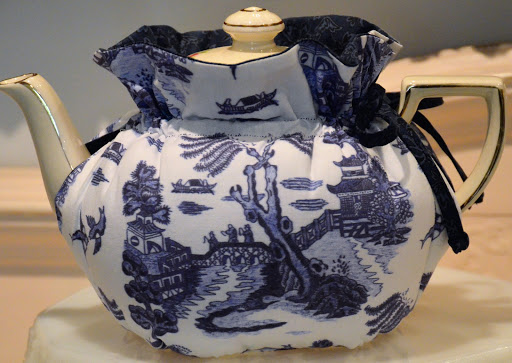