This year is your year to take Time For Tea!  Life is passing by so quickly so why not slow things down a bit with friends and family and enjoy a cup of good hot cup of tea and some lovely baked goodies.  In the days ahead and the New Year I will be sharing lots of recipes and ideas for just such times!

I tend to follow the seasons and celebrate each special occasion and I hope to give you ideas to do the same. If you are newly married and learning (if you have been married less than 10 years you are in the learning stage) you will find so much to learn by visiting the blogs of shall we say "mature" women and you can glean much insight from what they have already learned from their own mistakes and experiences. I have also added 5 new links to other creative bloggers I think have great ideas and contributions!

I would like to wish you a Very Happy and Healthy New Year!
New Links: A Storybook Life, The Corgyncombe Courant, Kimberly Shaw's Blog, Rose Cottage by the Lake, Lemon Verbena Lady's Herb Garden.
Posted by Bernideen at 6:21 AM 6 comments:

My dear, if you could give me a cup of tea to clear my muddle of a head I should better understand your affairs.   Charles Dickens

Surely everyone is aware of the divine pleasures which attend a wintry fireside; candles at four o'clock, warm hearth rugs, tea,

a fair tea-maker, shutters closed, curtains flowing in ample draperies to the floor, while the wind and rain ("or snow") are raging without.        Thomas De Quincey

Philippians 3:13b - 14  but one thing I do; forgetting what lies behind and straining forward to what lies ahead. I press on toward the goal to win the (supreme and heavenly) prize to which God in Christ Jesus is calling us upward.    The Amplified Bible

May your week be filled with Joy, Comfort, Peace and Love.....

So many Christmas Punch recipes are about Cranberry Juice which is lovely but I want to share a different recipe I think you will love today for Pink Saturday...it isn't pink but you will feel wonderful and healthy just drinking this...

My helpers here are my grandkids and the photos are from last year...yes this is a repost but I think you will love it just the same.  This recipe was created by Betty Reames formerly from Des Moines, Iowa and I first had it at my son's baby shower over 34 years ago.  Everyone loved Betty's recipe!

Here is the recipe:  1 large can pineapple juice, 1 large can frozen orange juice, 6 bananas mashed, 1 quart 7 up or gingerale, 4 cups sugar, 6 cups water and a jar or marachino cherries.

My little - but now bigger - Lily and Pete are going to town here on the mashing! This would make a lovely tradition for your family!

Mix and freeze the pineapple and orange juices with the water and sugar the day or night before.  Whatever you freeze this in needs to be smaller than your punch bowl.  When ready for the punch - dump the frozen mass into the bowl and add the mashed bananas, chopped cherries and mash together to form a slush - pour the gingerale over this and enjoy!

This lovely cup is for you! My punch bowl came from the Salvation Army and is probably  from the l950's....

Find others who participate in Pink Saturday at  http://howsweetthesound.typepad.com/
Posted by Bernideen at 10:21 AM 9 comments:

Welcome to the Holidays and the fun of decorating outdoors too! Hang up your skates and come on in....the fire is waiting! I have some nice hot cinnamon spice tea ready for you and a fresh scone or two....

All photos here are on Bernideen's Tea Time Blog

Wishing you a very Merry Christmas and prosperous New Year!
Posted by Bernideen at 5:18 PM 2 comments:

Sunday Celebration and the Book of Luke!

And it came to pass in those days that a decree went out from Caesar Augustus that all the world should be registered.  This census first took place while Quirinius was governing Syria. So all went to be registered, everyone to his own city.  And Joseph also went up from Galilee, out of the city of Nazareth, into Judea, to the city of David, which is called Bethlehem because he was of the house and lineage of David, to be registered with Mary, his bethrothed wife, who was with child.

So it was, that while they were there, the days were completed for her to be delivered.  And she brought forth her firstborn Son, and wrapped Him in swaddling cloths, and laid Him in a manger, because there was no room for them in the inn.

Now there were in the same country shepherds living out in the fields, keeping watch over their flock by night....

And they came with haste and found Mary and Joseph, and the Babe lying in a manger. (This nativity set given to me by my mother-in-law is over 90 years old from Germany.)
Posted by Bernideen at 6:52 AM 4 comments:

You Better Not Pout on Pink Saturday!

Today is Pink Saturday and we are supposed to share a favorite decoration....this is Pink Saturday in honor of Breast Cancer Awareness which is directed by Beverly at http://howsweetthesound.typepad.com/

I look forward to getting this sign out every year because it tends to get a bit crazy at Christmas and this sign helps me keep things in perspective!

Take time to enjoy everything...time is passing so fast!

I took a little time today to see some of my fellow bloggers posts
and admire their
decorations.....I think my style is tradional mixed with whimsy.

I don't always have the time to leave comments on other blogs like I would like but I try to visit my fellow blog links as often as I can to see what they are up too!

Perhaps you are like me...I love all the decorations and tend to get a little carried away in this area...

Back in the l970's I cut up an old antique quilt to make stockings for my family.  The quilt was handmade and perfect for this project. If you have an old family piece in poor condition this is a nice way to use it and pass it down in your family!

First I sewed the stockings and then I did embellishements on them.

Decorating for the Christmas Season #2

For me Christmas is about the birth of Jesus - this is what Christmas means to me....

Since I love decorating all year long  at Bernideen's Tea Time Blog - no season is more of a pleasure that Christmas....

I am at the point now that if I bring something home it has to be wonderful and I do try to get rid of what I don't use! 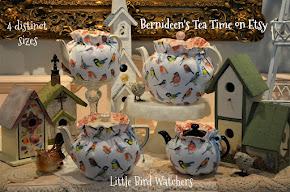 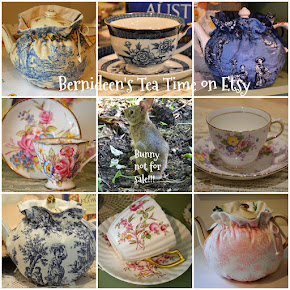 I sell tea cozies, cups and saucers and tearoom ephemera!

This blog moves through the seasons enjoying Afternoon Tea with baking, cooking, decorating and gardening. All photos are taken by Bernideen so please ask permission to use them! Copyrighted 2008-2020