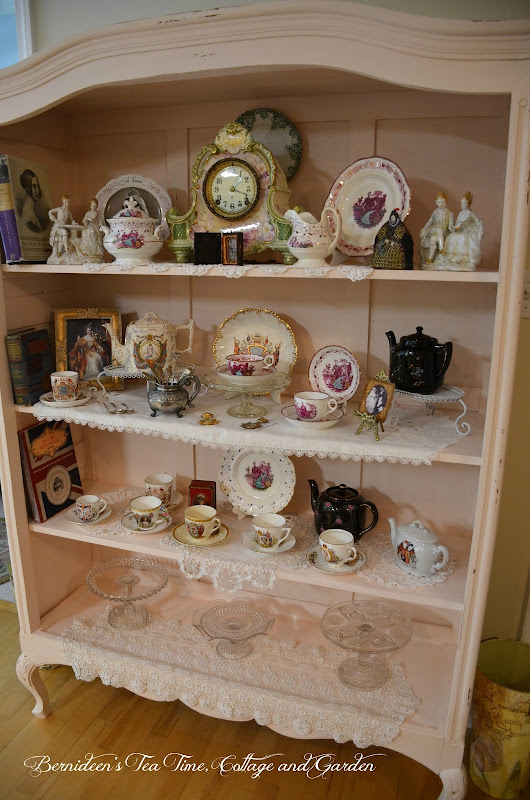 of Queen Victoria wares which

I recently decided to move over to my kitchen

open armoire shelving.  The teapot on the

right on the stand above is a commemorative

jackfield type pottery one.  And then

another below with the sliding lid: 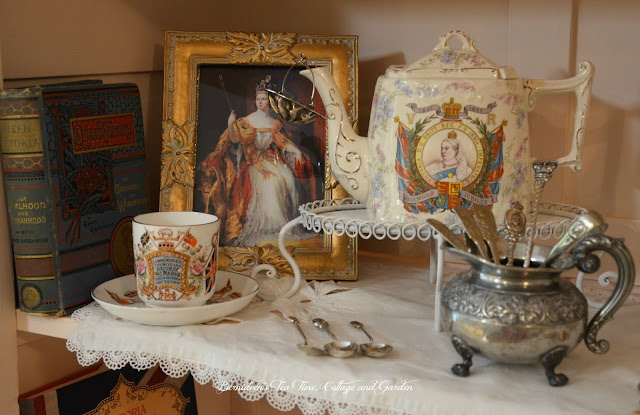 Over the winter and early this year, I started

and a couple commemorative pins which I love.

The pin on the right shows 4 generations:  from 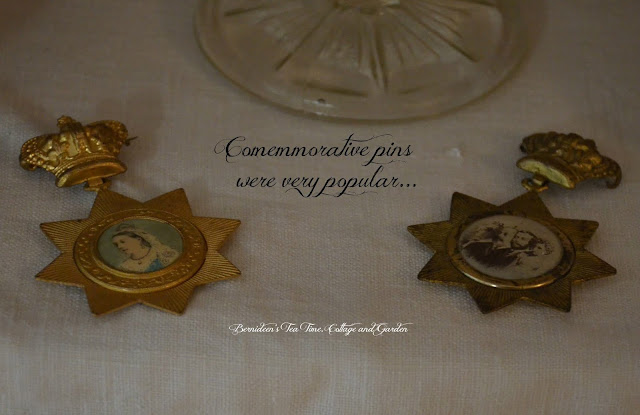 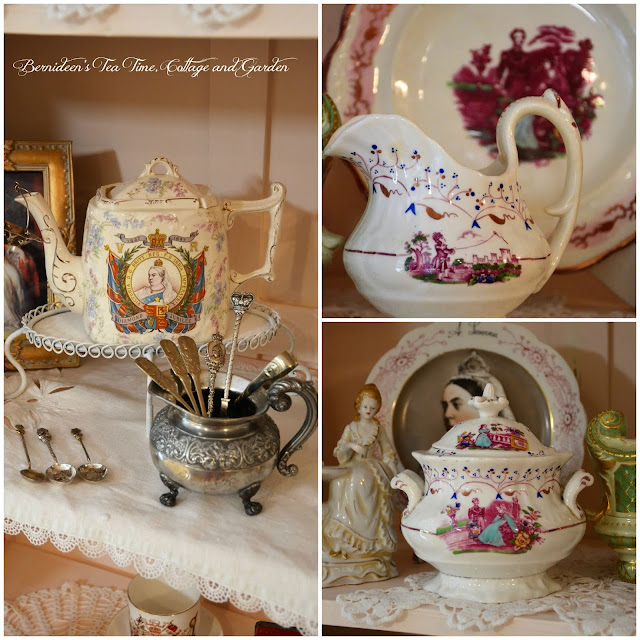 A lady in Canada who I was communicating with told me about this book which is very interesting: 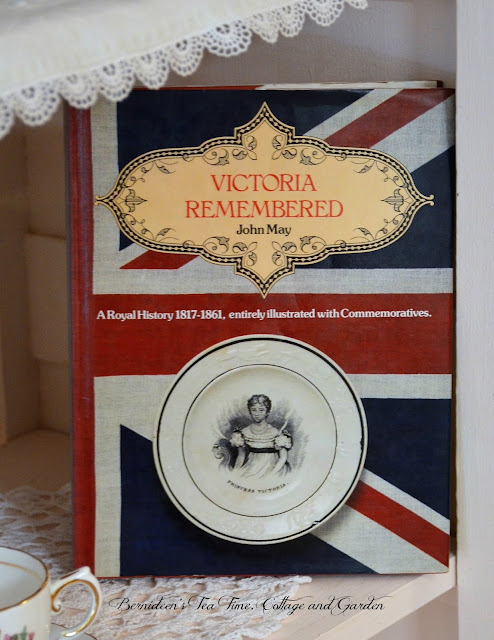 I found mine very inexpensively on ebay. 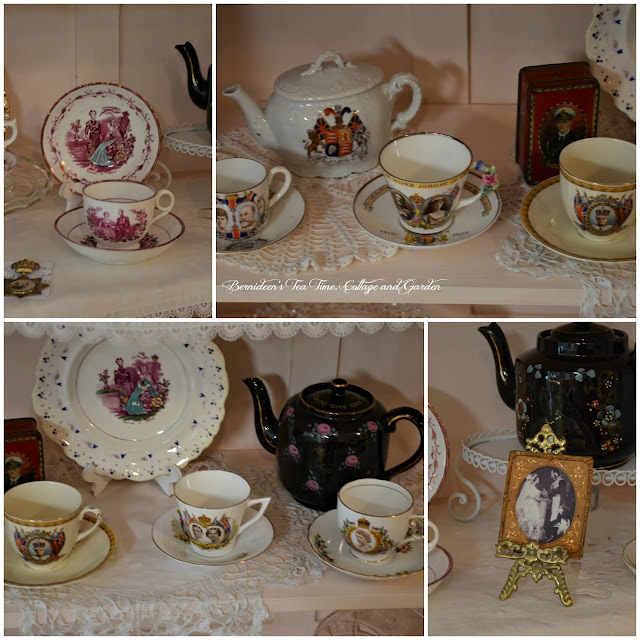 I was wanting just one cup and saucer for each Royal couple in the  succession of Kings and Queens that followed Queen Victoria.

then Edward VIII (abdicted) and followed by George VI  before Queen Elizabeth. 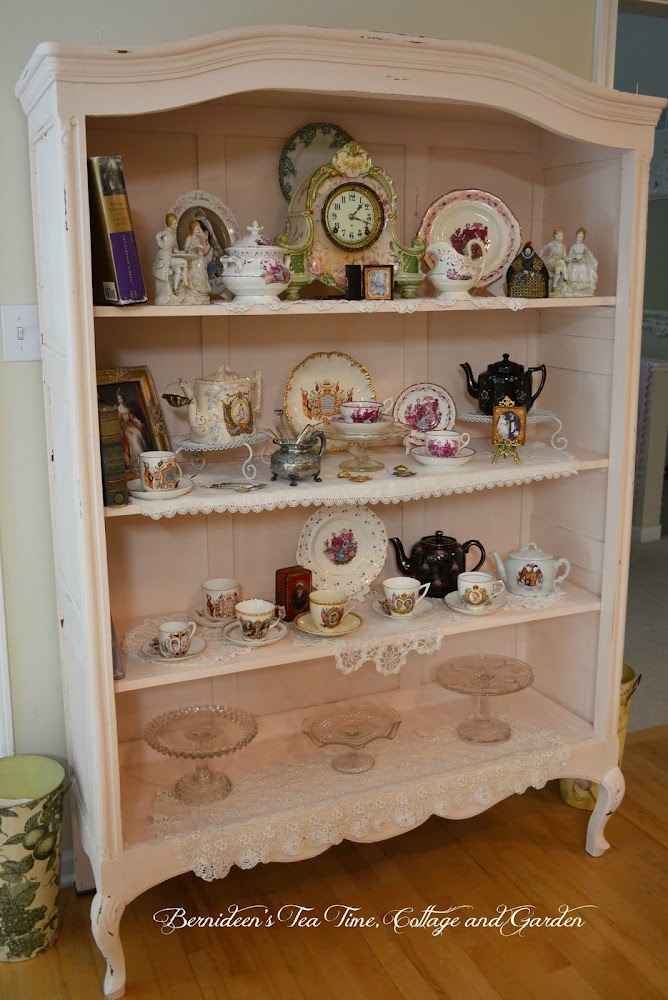 This week might be a wonderful time to experience
an Afternoon Tea too!  Queen Victoria
certainly contributed to the advancement of
teatime.  You will find many recipes on my site to
bake and prepare food items for an Afternoon Tea. 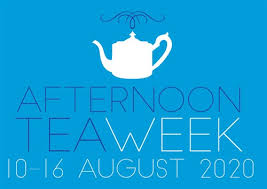 Posted by Bernideen at 3:24 PM

I love when I get a bit of history when I read a post. You have a wonderful collection. I've had a few pieces. I've always wanted to see some of the ROYALS pottery set on a table of tartans...wouldn't that just be smashing...as they would say. Thanks for the info, hugs, Sandi

You certainly have a very nice collection of Queen Victoria wares! Happy Afternoon tea week to you!

Victoria Remembered looks wonderful! Just ordered it off of Amazon. Thanks for the recommendation. Blessings to you.
Serena

That is a lovely collection. I have a book of letters from Victoria. I found it at our library used bookstore.

An absolutely stunning display and collection! Thanks so much for sharing!! Stay safe, healthy and happy!
Hugs,
Debbie

Incredible collection, and how wonderful for you to find so many
items. Great to look at on this hot afternoon, and I still had
a cup of hot tea.

Now I have to make scones. Thank you for sharing all this wonderful collection.

I so enjoyed seeing your Queen Victoria items. Hopefully some year again I can see them in person.
I just watched your you tube of the tour of your garden also. I'm sure your garden is fabulous this year.

I must get back to blogging

You have a beautiful collection. I enjoyed looking at all of it, especially the gorgeous teapots. It sounds like a good hobby to be searching for these!

Bernideen, I love seeing all your tea things, especially because you present them in a themed way that pulls everything together. I am so longing to go out for afternoon tea as soon as possible! But for now ... at home, so posting my latest afternoon tea savory this Thursday.