SEEING A FRIEND AT ANOTHER TEA ROOM

Yesterday we went back to Greenwood, Missouri
to take a "relook" at 2 items we had seen
there - but unfortunately,  the 2 shops were closed.
The one shop called "As Time Goes By Greenwood"
was where earlier I had found this cute patio
tea cart for our deck.  I also had gotten a
bird house there that I will show you later. 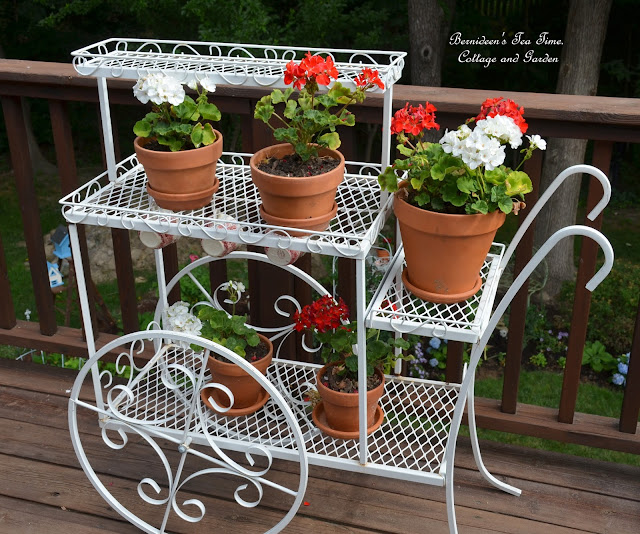 They had a sign on the door that they were closed
due to their air conditioning going out.  Since
it was in the 90's, I hardly blame them for closing early.
The other shop was also closed in Greenwood
......so we went on down
the road looking for another adventure. 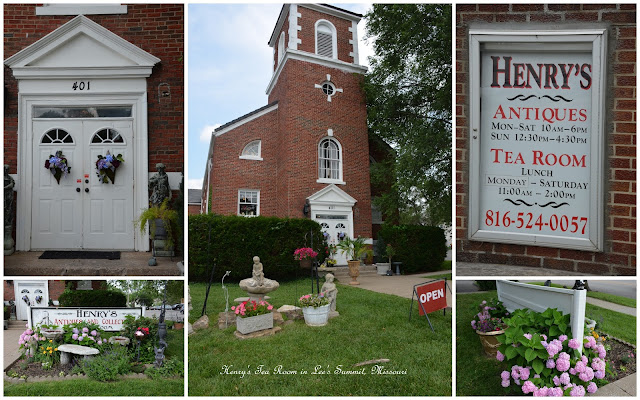 In Lee's Summit, Missouri we came upon Henry's Tea Room.
It was after lunchtime and since we didn't even know we
were going there - we were happy they invited us in for a lovely lunch of delicious salads and tea and dessert. 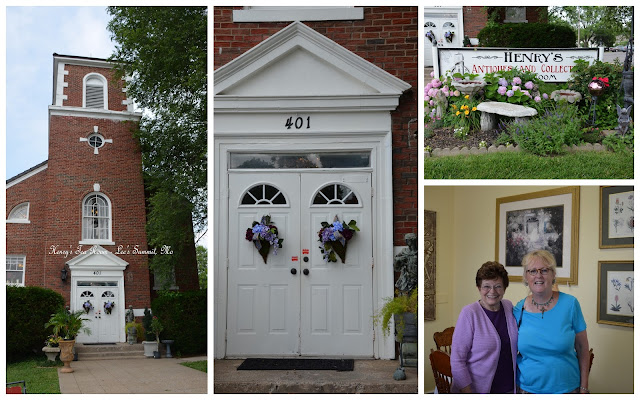 I never expected to see someone I knew there but as we
walked past one of the rooms I saw Midge Davis from Colorado Springs, Colorado. I knew her because she worked with her sister, the late Jan Simpich at Simpich Character Dolls in Old Colorado City.  Midge was with a group of high school friends
having a reunion in one of the rooms. 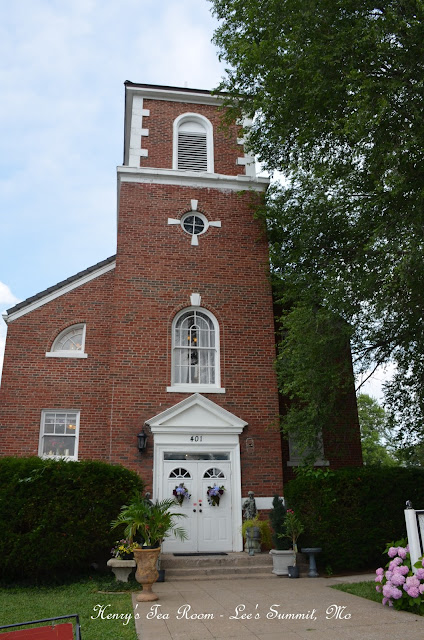 Please remember I wasn't properly dressed for tea as we
were just out relaxing and antiquing and the tea room
just popped up in the journey.
It was a delight to see Midge. 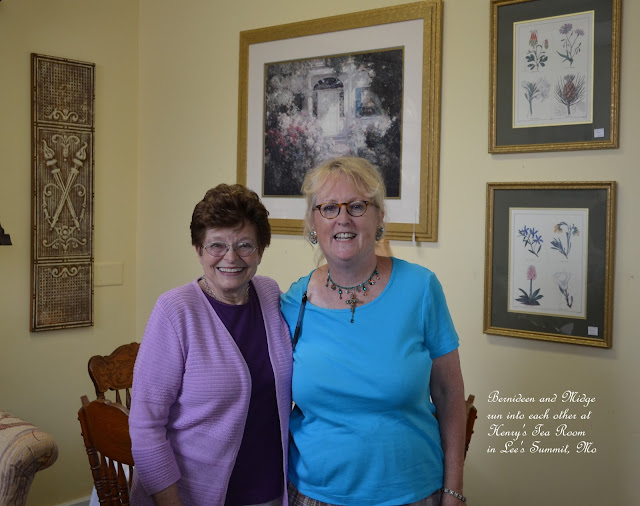 This was the shop in the upstairs of the old church and the tea
room was in the basement: 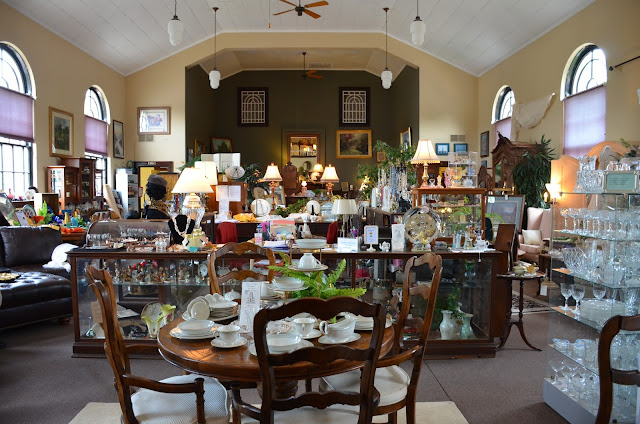 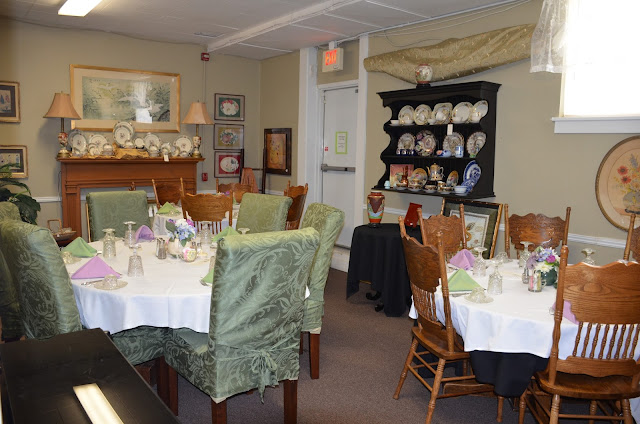 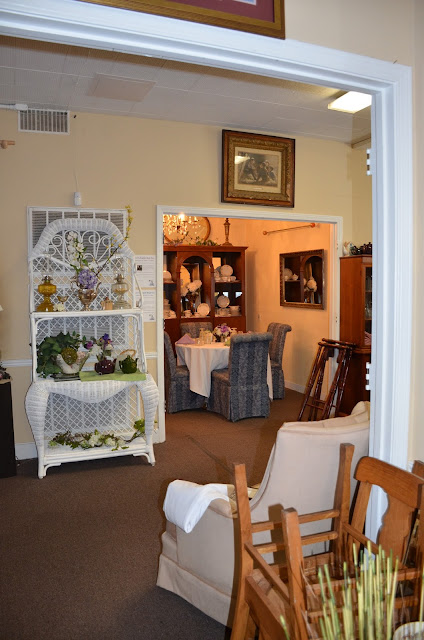 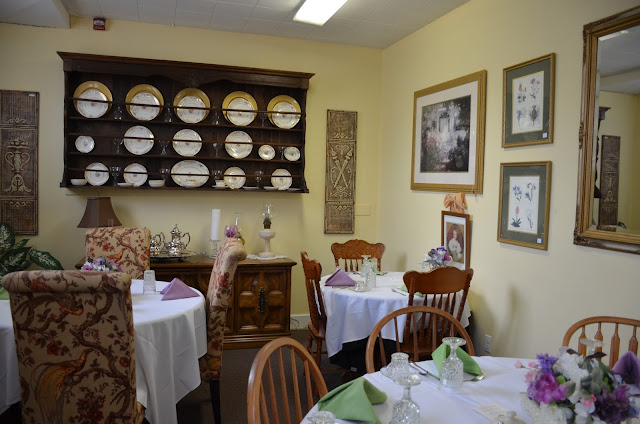 Did you ever run into a friend in a place you never expected? 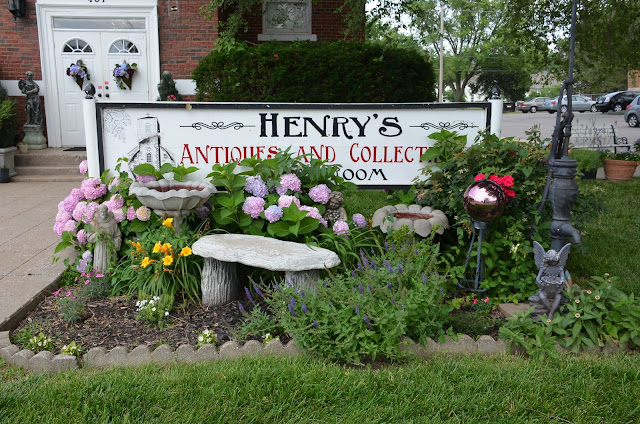 Sharing this post at
Vintage Charm
Posted by Bernideen at 11:44 AM

It's fun, isn't it?! Yes, I have had that sort of experience...both my high school chum's family and mine were planning a trip to Washington, D.C. for spring break. We joked about seeing one another there, but we actually did! Found her at the zoo no less.

Finding your friend at the tea room sounds even nicer. What a lovely tea room. I'd want to try the cushioned seating because the pressed back chairs are like the ones I sit in all the time.

I'm sure it was disappointing to have both shops closed! What fun, though to find a tea place and shop and run into an old friend!

That is fun to run into someone you knew in Colorado. Lovely photos.

You've done such a wonderful purchase, my sweet Bernideen, and I'm so glad to read that you've met your friend by surprise, such meetings are so very good for the heart !

I so love this amazing, old church and both the shop and the tea room it hosts inside, in Italy we've not such lovely, gathering places, someone should think about it !

I love your barden tea cart so nice. Its wonderful that you ran into a friend you just never know. To bad that shop wasn't open but maybe what you wanted will be there later. I do have a facebook under Lala Corona it's my nic name. I would love to join you dear ladies so I will go to search for you. Thank you so much for your visit and letting me know about the group, it is very much appreciated. And ya look just fine. Have a blessed evning dearest Bernideen. With love Janice

What happy serendipity! I once ran into an acquaintance at Heathrow Airport--we were both on a layover and ended up on the same plane heading home.

Bernideen, it looks as if you had a wonderful time! Thanks for sharing.

Wow that is a fabulous marriage of tea and church! I want a shop like that! Thanks for sharing!

wow, what fun. I love tea rooms and junking. And yes to your question. we recently drove to Alabama from Texas and when we reached Memphis, just above Mississippi/Alabama, I was getting bored so I texted an old friend I hadn't seen in 15 years and had never before texted (just started texting this year) and hadn't even talked to her in over a year. So I asked if she and her husband were out traveling in their motor home and she shot back that they were in NW corner of Alabama doing some repairs on their RV. We were headed right toward them! So we spent the night at the nearest hotel to the town they were in and drove 15 mins to spend the day with them. It was a real treat.

Henry's is a favorite of ours both for the tea room and the antique shop! And I adore Greenwood -- there is a tea room in the large antique mall there that's quite good as well!

Hi Bernideen, that is amazing that you saw your friend from back home here in your new home state! How fun! A true gift from God, that he put you two in the same place at the same time.
Hope you are having a great week,
Gina

How special to run into someone you know unexpectedly. I think you looked fine for tea. What a nice shop too.

What fun to see a friend at the tea room, Bernideen! You look so pretty for tea, and you even have on a necklace. Yes, years ago, my late beloved and I were going into the Empire State Building and we ran into a high school friend.
I love your outdoor tea wagon, my friend! It is so adorable and I want one. I'll be on the look out!

How serendipitous to meet your friend there in Greenwood! Isn't it lovely when that happens? It looks like a lovely place to visit for tea and I love your little tea cart on the deck! I want one too.

It's a small world isn't it? I always seem to be running into people I know, in the strangest of places. What a lovely tea room and the room up the top with all those pretties would have been lovely to wander around in. I love your pretty white flower cart. Those bright and colourful geraniums look fabulous sitting on it.

Don't you just love those chance encounters, proving once again 'it's a small world'! Loved all the photos - I would enjoy this place!

What a fun day it turned out to be, Bernideen, despite the unexpected closings. So glad you linked up with Vintage Charm :)